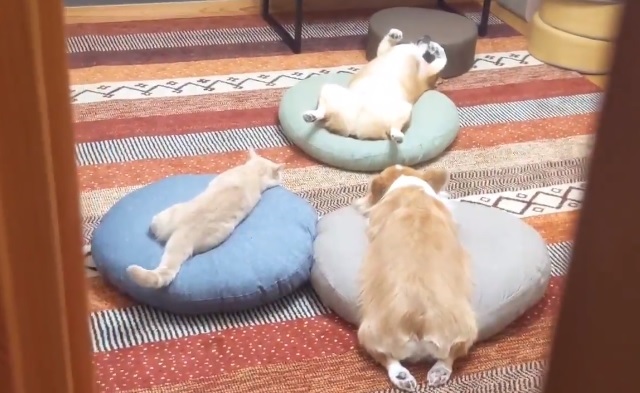 Obviously, anyone who has pets loves playing and directly interacting with them. But sometimes, the most memorable, heartwarming moments come when you’re just quietly observing your furry friends being their natural, adorable animal selves.

So when Japanese Twitter user @muchi21067312, who shares their home with two corgis (Chi and Mu) and a cat (named Totoro), quietly slid open the door to the room the trio were currently in, the owner probably expected a secret peek at a sweet scene…but definitely not this.

The three animals had taken up positions on cushions arranged in a triangular pattern. In the foreground, Totoro and one of the corgis were perched almost completely motionless, with the steady curling back and forth of Totoro’s tail the only movement. Both animals were staring intently at the remaining corgi, who was spread-eagle on the third cushion, and as still as death. Watching the video, you start to think the only reason the cushions are arranged in a triangle is because there weren’t enough for a pentagram.

“They’re having some sort of strange ritual,” tweeted @muchi21067312 with the video. “Whatever they’re doing, it’s terrifying, so I’m just going to shut the door.”

There’s definitely something unnerving about the atmosphere, even if the animals themselves are still pretty cute, as reactions to the video have shown.

“They’re totally up to something.”
“Are…are they sacrificing the dog in back?”
“Maybe that dog is the high priest.”
“I knew it. Our pets are actually Freemasons.”
“’It has begun. Now no one can stop us!’”
“You saw something that was best left unseen.”

Eventually, @muchi21067312 worked up the courage to step inside the room, which resulted in only the slightest of acknowledgments from Totoro, while the two corgis continued…doing whatever it is happening here.

We should point out that despite how the video looks, all of the animals are alive and healthy. As a matter of fact, @muchi21067312’s corgis seem to have a thing for lying motionless on their backs, as this video from last month shows.

Still, we’d keep an eye on what they’re up to behind closed doors, just in case.