Cute dog video: Pet dozes off while accompanying his owner to binge-watch TV at midnight

By Billie Thomson For Mailonline

It’s no mystery that dogs love spending time with their owners. And this loyal pet was so keen to keep his master company he couldn’t help but nod off while sitting up.

The two-year-old Bichon Frise, called Er Mi, is caught on camera struggling to stay awake while accompanying his owner to binge-watch TV shows past midnight.

Even though it was way past his bedtime, Er Mi insisted on sitting on the sofa to be by his master’s side, his owner told MailOnline. 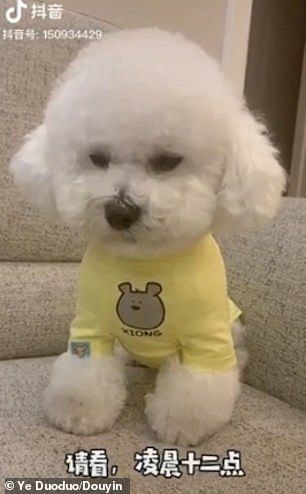 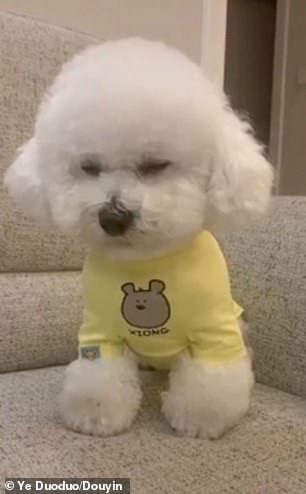 Er Mi the pet is caught on camera trying hard to keep his eyes open while leaning towards one side slowly due to sleepiness. The two-year-old Bichon Frise was watching TV with his owner

Er Mi and his owner, who calls herself Ye Duoduo, live in the province of Zhejiang in eastern China.

Ms Ye describes her beloved pooch as ‘clever but sometimes a bit silly’.

She says that Er Mi often stays up late to keep her company whether she is working or watching TV.

Ms Ye recorded the sweet footage one night in March because she found the scene ‘extremely funny’. She then uploaded the footage onto Douyin, the Chinese version of TikTok. 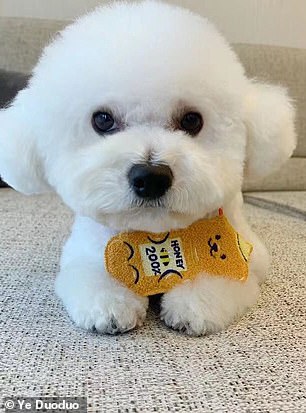 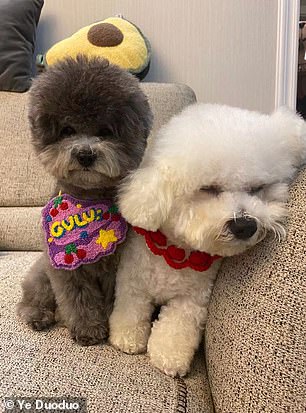 Er Mi’s owner, Ms Ye, describes the pooch as ‘clever but sometimes a bit silly’. The pet is pictured on his own (left) and with one-year-old toy poodle, San Mi (right), also owned by Ms Ye 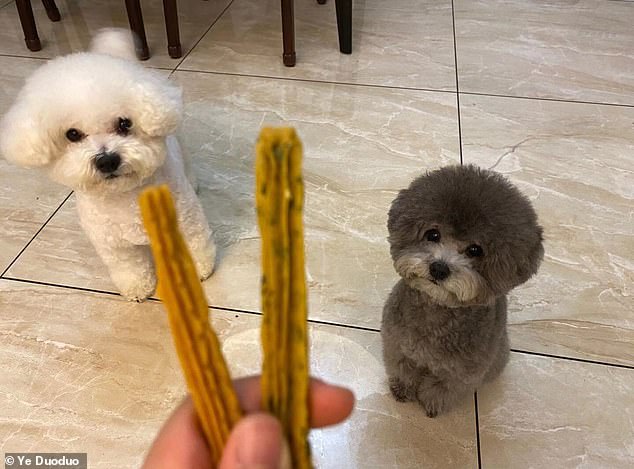 Er Mi, San Mi (both pictured) and their owner live in the province of Zhejiang in eastern China

The 15-second clip shows Er Mi donning a yellow top with the Chinese spelling of ‘xiong’, or ‘bear’, while sitting on a beige sofa.

The pet is seen trying hard to keep his eyes open while leaning towards one side slowly due to sleepiness.

The video has melted the hearts of hundreds of web users.

One fan wrote on Douyin: ‘This is what dog-tired means.’

Another one prompted the owner: ‘Quick, go to bed. Don’t let the dog stay late with you.’

A third commenter, also a dog owner, said: ‘[My dog] would have been fast asleep by then.’